A wide area layer-2 network provides high-speed virtual line services among customers’ LANs. The virtual line can be called as a VLAN path, and can be established with VLAN technologies. A VLAN extended layer-2, namely Ethernet, frame has an extended VLAN ID/tag header. A layer-2 switch in the wide area layer-2 network forwards the layer-2 frame in accordance with the VLAN ID and the destination MAC address of the frame. Therefore, when establishing or tearing down a VLAN path, VLAN configuration of all layer-2 switches along with the VLAN path is required.

Approach of Flexible-Switch for Next-Generation Layer-2 Networks
This work proposes a flexible switch for constructing of next-generation layer-2 networks. The proposed switch can dynamically implement a new service and a new protocol.A wide-area layer-2 network will provide many kinds of services including end-to-end QoS guarantees, protection mechanisms, and performance monitoring. When new protocols are developed, it is necessary to compatible them with existing networks. Thus, a complicated network structure and complicated protocol processing are introduced into the network. By using the flexible switch, protocol developers can design it freely, and propose the best protocol. Moreover, the next generation layer-2 networks will be controlled by GMPLS (Generalized Multi-Protocol Label Switching). Then, by using the flexible switch, we implemented that the switch loads a necessary function to provide the requested services when a LSP (Label Switched Path) is established by RSVP-TE. In this implementation, we realized the dynamic construction of the switch processing and the establishment of the LSP that adapted the services. 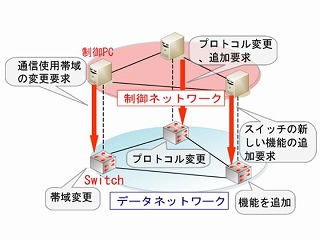 GMPLS-controlled Next-Generation Layer-2 Network
Wide area layer-2 service established by the carrier provides virtual private line (PATH) among customer’s LANs. However, establishing PATH among actual network requires configuring VLAN to each switch on the path. These configurations had been traditionally set up by operators manually, but in accordance with the network expansion, setting up VLAN to all switches has been complicated.
GMPLS (Generalized Multi-Protocol Label Switching)-controlled Wide area Layer-2 network addresses these issues. The big feature of GMPLS is that it establishes communication path prior to data transmission, and is getting attention as a state of the art control technology for optical network. By applying GMPLS to Layer-2, it is possible to achieve autonomous distributed control of the network. Each switch exchanges control information to find optimal route and then configures VLAN to establish the PATH, so operators are unnecessary to setup manually like before. Additionally, because it is feasible to dynamically establish the PATH at a request of customer and able to manage services like QoS guarantee and bandwidth control, GMPLS is expected to be the next-generation control technology for Layer-2 network.
Currently, IETF has been standardizing GMPLS but the detail of the protocol is not yet determined. This study proposes a new approach for the standardization of GMPLS-controlled Layer-2 network, and verifies its effectiveness by implementation experiments.