A lambda grid system has been proposed as a huge computer grid system, based on an advanced photonic network technology. Grid computing provides the infrastructures that make a high performance virtual machine by combining PCs, data storages, various devices and etc. via networks. Participating dynamically vast resources about computing deployed geographically and operating in parallel with some PCs is the issue to realize grid environments. For the issue, vast data transfer is needed, such as resource information data, input data jobs need and output data. Then, to introduce WDM (Wavelength Division Multiplexing) and optical path for grid environment is under research. The grid environment is called λ grid. 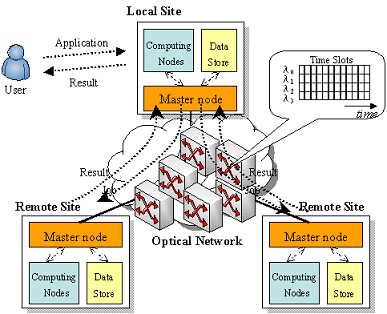 A Deadline-Scheduling Scheme for Wavelength Assignment
In this research, we assume each wavelength is divided into time slots. The conventional job scheduling assigns a lot of time slots to a call in a short term in order to finish a job fast, so there is a problem that the blocking probability of short deadline calls is degraded. Therefore, we propose a deadline-scheduling scheme for a wavelength assignment in a lambda grid network to guarantee call’s QoS. Our proposed scheme assigns time slots to a call in a long term according to its deadline. Thus, it can reduce the blocking probability of short deadline calls. Computer simulations show that our proposed scheme can reduce from one order to two the blocking probability compared with the conventional one under low load.

Server Selection Method for Parallel Downloading
In the grid system, data stored as the file format. To reduce the influence of file damage and to distribute the load, replica files are stored many servers. Parallel downloading is promising to decrease downloading time, improve transfer rate, and distribute load to many servers. However, parallel downloading triggers many bottleneck links in the network, since many links are used in simultaneity. Therefore the blocking probability of new lightpath set up becomes high. In this research, we propose a server selection method for parallel downloading in WDM network which considers the wavelength availabilities of each links to decrease bottleneck links and to enhance the network efficiency. The proposed scheme can optimally select servers and reduce the blocking probability by considering both wavelength availability for each link and original costs.

Job Scheduling
In an optical grid system，users can reserve computer resources and network resorces in advance specifying job execution time by using GMPLS technology．In conventional job scheduling，when the scheduler cannot reserve resources for a new job, it compares a priority of new job and that of already assigned job(existing job). If a priority of the
existing job is low，the scheduler interrupts execution of the existing job immediately. The overheads increase with job interruptions. Therefore，we propose a novel job scheduling algorithm that considers job end time of existing jobs as well as priorities of jobs．Computer simulations show that our proposed scheme can reduce the average delay time from 15 % to 20% compared with the conventional job scheduling.